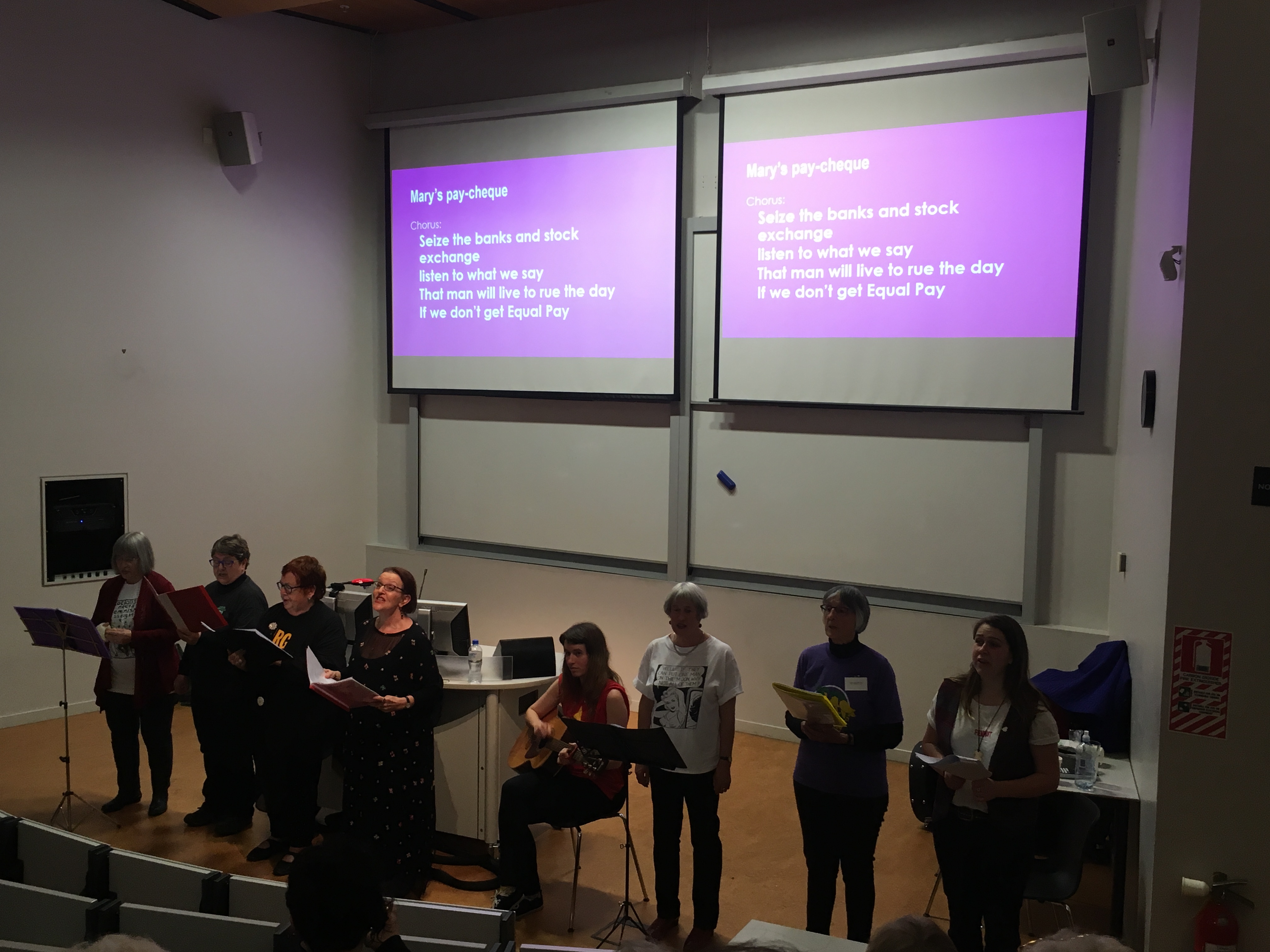 The Women’s Studies Association/Pae Akoranga Wāhine’s biennial conference was held at Victoria University of Wellington in association with the Stout Research Centre for New Zealand Studies. The theme was “Feminist Engagements in Aotearoa: 125 Years of Suffrage and Beyond” due to it being the 125th anniversary of women’s suffrage in New Zealand. There was no separate hashtag for the conference; instead, the nationwide #suffrage125 one was suggested for participants. This conference had a different feel than the previous one I attended, but it still featured plenty of singing and a bicultural thread throughout.

Nikora discussed Riperata Kahutia (1838/39 – 1887) and the research she engaged in in order to see how many times Kahutia was in the Maori Land court for both herself and others, using the Maori Land Court Minute Books Index at the University of Auckland. She said something that many people don’t realize is that one had to be well-resourced to attend Native Land Court and had to know something of the law. Genealogy was not just about one’s family line but land in order to prove claims. In addressing the theme of 125 years of women’s suffrage in New Zealand, she used an interesting image, saying that to her, the vote is simply a point in time. It didn’t stop the rain. It still rains.

Anne Else – Women Together Online: Weaving Feminist History into the 21st Century

Else discussed her project as the editor of Women Together: A History of Women’s Organisations in New Zealand. It received funding to digitize this year. She mentioned the cycle of loss and recovery – she hoped 3rd and 4th wave feminists were closer to 2nd wave feminism and wouldn’t go through this cycle, but she said younger feminists say if it’s not online, it doesn’t exist (and info is often only cursory). Sandra Coney’s Standing in the Sunshine is out of print, as is only biography of Kate Sheppard (only one copy available online, selling for $200). The WSA received funding to digitize the Women’s Studies Journal.

In discussing Wikipedia coverage of women, she said 21% of Wikipedia’s New Zealand biographies are on women, so it’s better than the 17.6% of general biographies on Wikipedia, which is up from 15% thanks largely to efforts of the project Women in Red. Other topics mentioned were volunteering and online abuse. Women contributed 1.9 million more hours in volunteer work in 2016 than men and in different areas. She said violence and abuse are the wallpaper of women and girls, and the online abuse is not a new phenomenon but an extension of everyday misogyny (women tried to be prevented from entering the public space). One specific challenge in gathering information about women’s groups online is that groups don’t date stuff on their websites, or their Facebook page/group doesn’t have info about how to contact organizers.

Lynette Townsend – Where the Women At?

Townsend said she works at the Ministry for Culture and Heritage and for the Suffrage 125 year helped put up exhibition content on activism on the NZ History site. She said young women are learning about feminism through celebrities like Beyonce, Lorde, and Emma Watson and internet and social media, and mentioned the Ace Lady Network in New Zealand. I was glad to learn how to say Mary Ann Colclough’s last name (pronounced ‘Coke-ley’) after doing my own research on her. Towsend discussed Simmonds’ (2011) definition of mana wahine: “exciting theoretical development that enables Māori women to (re)present and (re)claim our knowledges, experiences and practices”. She mentioned Coco Solid, an artist and illustrator, and that she was interested in perspectives that have been neglected. Her hope is that knowing our history, we can strategically build on the experiences of others. One comment was that this type of narrative neglects that second-wavers are still active, and it’s not just younger people doing stuff now. It also leaves out the activism of the 1930s and women like Elsie Locke.

Kara Kennedy – No Woman Left Behind: Digital Literacy as a Pressing Gender Issue

I presented on the gender gap in tech and the lack of digital literacy among students, why it is urgent that we do something about them, and some ways that the Digital Humanities can help address this from a new and different angle than the one that tries to get more women into STEM.

This was an interesting presentation of perspectives about various issues in reproduction and technology, such as where the law sits in relation to surrogates. Panellists differed in their opinions of the best way to move forward in this ever-changing landscape, which made for an engaging and thought-provoking discussion. This musical performance was an engaging way to look at the history of feminist music and themes that unfortunately are still relevant today. The audience was invited to join in with the words projected onto the screen and there was a lot of laughter.

Sandra Grey and Sarah Proctor-Thompson – Workshop: The Gendered Impact of the Neoliberal Project in Tertiary Education

Sandra gave a brief presentation on the current state of affairs in tertiary education in New Zealand, including aspects such as new public management techniques that are audit-based (ex: did 80% of students pass?), PBRF requirements, and heavy emphasis on students getting jobs after receiving their qualifications. Only about a quarter of professors and associate professors are women. She recommended reading Dame Anne Salmond’s speech at Women of Influence Awards. The Cabinet papers refer to staff as resources to be used efficiently. The TEU’s recommendations based on its State of Tertiary Education Sector Survey 2018 are now available.

One of the questions discussed amongst the workshop participants was whether there is a gendered component to these issues. Participants mentioned several ways, including that women take more responsibility for being good teachers and pastoral care, while men have taken up individual competitive game more; there is more emotional labor demanded of female tutors (not counted and not valued by neoliberalism); and that the Arts have suffered compared to Engineering. There were comments about Humanities faculty having taken up poststructuralism without realizing they were getting rid of communal and social and creating inaccessible language; tensions for students between academic striving and thinking about preparing oneself for future market; it’s becoming harder to get support for organizations like the WSA to book rooms; and there are more paywalls and closed access so non-staff and students can’t access materials.

Sumita Mukherjee’s Indian Suffragettes (2018) was mentioned as a resource that documents British suffragettes of color. Manying Ip described how Asian women are still forgotten and overlooked (and considered to be the Other) in New Zealand. The Chinese couldn’t naturalize between 1908 and 1952 and couldn’t vote because they were considered ‘aliens’. She showed a collection of political cartoons called Aliens at my Table: Asians as New Zealanders See Them (2005). The Chinese are the perpetual Other and there are formidable hurdles for contemporary Chinese women, including still being ‘aliens’, having a lack of tradition and role models, and being unsure of a sense of entitlement (it still feels like ‘white people’s’ land). She said that the connection between the Māori and Chinese is really worth exploring (for example, Aunty Kiripuai (b. 1916)).

Golriz Ghahraman discussed some of the challenges that women of color face in New Zealand, especially when they become more visible as she has as a member of Parliament. She said the East like the West has fierce feminism, environmentalism, and democracy movements (even if it manifests differently). All the microaggressions by people in power reinforce racism and feed it. She made the Ministry of Women desegregate the data on the gender pay gap because they hadn’t officially done so, and this revealed the differences in pay among women of different ethnicities. Amnesty International has identified online abuse as a key human rights issue this year. She described how ‘leaning in’ isn’t always/often safe, so it’s not a good thing to tell young women of color to just do that as if it can overcome the structural and other issues. Women of color need to be at the table not just consulted on for changing the system.

Berlinda Chin asked participants to go to havemysay.govt.nz for state sector reforms. D&Is (diversity and inclusion) are still seen as nice to have, not need to have. She said that’s what we’re up against, but also what we can be up for – having ‘courageous’ conversations with coworkers and others around us.

Rachel Simon-Kumar closed the session by looking at some of the ways women, including immigrant women, are treated in New Zealand. She mentioned an article ‘Expectant mothers ineligible for free health care fork out millions to give birth in NZ” that at first seemed sympathetic, but then later showed a fear of unpaid bills, as an example of the rhetoric. Woodward’s presentation was a fascinating look at recent developments in the world of sex robots and how they relate to feminist issues and ethical considerations. The book that kickstarted the ethics conversation was David Levy’s Love and Sex with Robots (2008) – it asked can a robot consent and does it matter? She said the issue is not just about sex robots but also about real women and how they are being treated: subservience and control, maltreatment, etc. Speaking of Masahiro Mori’s idea of the uncanny valley, she said our emotional response goes up the more human a robot looks. She mentioned Sophia the Robot and Realbotix’s ‘sexualized personal assistant’. Sex robot brothels are opening up, seen as solutions to disease and loneliness. Male designers make robots to be exploited. 95% of sex robots are female; one named Samantha was so mistreated it lost fingers. There is a commodification of intimacy (something you buy), and even the suggestion that they are an answer to the ‘incel’ problem. and how celebrity models are not consenting to bots but have little control over others creating them. She mentioned Laurie Penny’s The B* Doctrine (2016) and recommended checking out the documentary ‘The Sex Robots are Coming’ (2017). The Gender Attitudes Survey revealed deeply entrenched attitudes of victim blaming (such as 29% of respondents agreeing that false rape accusations are common) that decades of feminist activism haven’t been able to change. The video has had a wide reach, having been shared 21,000 times on Facebook and been used by groups in schools, rotary clubs, consent education, etc. Organizations can pay a small fee to run the survey with their own organization’s people and compare the results with the national survey. It can be viewed at www.genderequal.nz

Farvid followed on from the discussion of gender attitudes to discuss some ways to prevent gender inequality from becoming entrenched. She said that one first thinks a stereotype, then feels, then behaves. Men benefit directly from changing masculinity norms because it is primarily men who kill other men. Quotas are one thing to consider because it doesn’t look like companies are going to get to equality on their won. She mentioned her article on #metoo in the New Zealand media. Some ways to implement a shift in thinking include: gender equality education in schools, media literacy across all schools, prioritizing comprehensive sex education, and focusing on ethical conduct in human relationships. The Swedish model of education is one example to consider.

Marvelly was the final keynote speaker. She has a weekend column in the New Zealand Herald and a web series, and she is the editor of Villainess, a digital media project for young women. She shared anecdotes about her time at King’s College in Auckland and that their prefect handbook still hadn’t changed to eliminate male language and had only one quote by a woman in its 50 pages. She discussed the online hate she has had to deal with and said that her new book, That F Word: Growing Up Feminist in Aotearoa (2018), has a list of commandments for how to deal with online abuse.