If you’re looking for another way to immerse yourself in the Dune universe beyond the books, playing the Dune (2019) board game (also called DUNE: A Game of Conquest, Diplomacy & Betrayal) is a good option, especially if you already enjoy playing strategic board games. It took a while for me to actually sit down and dedicate the time to play because reviews talk about how difficult and complex the game is. Plus, it is supposed to play best with several players, and despite years of trying to convince some of my friends who play board games to read Dune, they haven’t gotten around to it yet.

I’m happy to report that even with just two players, the game was quick to pick up and fun to play, although I can see that you definitely need to play with more factions to experience the full strategic and cutthroat aspects. The rulebook suggests starting with the Atreides and Harkonnen factions, and this made for a quick rivalry. The traitor cards added a surprise element to battles, and the unpredictability of the roving storm made for some interesting turns. It was really the thematic elements of the game that were the most enjoyable — battling well-known characters, securing regions and strongholds like Arrakeen and Carthage, and attempting to harvest spice brought home the universe of Dune.

In gameplay, each turn consists of nine phases, and there can be up to ten turns in a game. The phases are:

Though this may seem like a lot, some of the phases don’t have anything happen in them every turn or are very short if they do. For example, CHOAM Charity Phase is when you can top up to two coins if you are below that amount, and Mentat Pause Phase is where you see if anyone has met the victory conditions and if not, keep playing. Once I’d read the rulebook and quick start guide and reviewed it for the first few turns, I only needed to consult it occasionally, although things would be more complicated with more crowding on the board.

In brief, the storm moves around, wiping out unprotected people and sand; spice blows appear and alliances can be formed; coins are dispensed to those who are low; players bid on treachery cards that have weapons and defenses and other stuff on them; people who died and were sent to the Tleilaxu tanks are returned to players’ reserves; players can ship reserves to the planet’s surface for a fee and move them on the planet; players whose figures occupy the same space engage in battle; players whose figures are on spice collect it; and then the next turn starts if no one has won.

Each faction has special abilities – I can’t wait to try out the Bene Gesserit next time. The Atreides has prescience, so they get to look ahead at face-down cards about to be drawn, as well as ask you what you are going to use in a battle, which enables them to change their strategy accordingly. This ability fit well thematically but still made you curse the unfairness of their being able to see the future! The Harkonnen were experts in treachery and got to keep more traitor and treachery cards. Since I was learning the game, I forgot to reveal Thufir Hawat as a traitor early on, but this had the effect of lulling my opponent into a false sense of security and thinking Lady Jessica was the traitor instead. How sweet to reveal Hawat in a later battle and absolve Jessica just like in the book! 🙂

One quibble is the presence of some errors in the synopsis of the book at the back of the rule book. Although this may just be a repeat of the original, I wish such inaccuracies would have been picked up and corrected in this new edition. It sounded like whoever wrote it hadn’t read the book in a while and was misremembering things; another reason why it is important to have someone else check your work. Aside from these issues, it managed to condense and tell the story in an interesting way – no easy feat for such an epic book.

There are some oversights or distortions of information in places. This makes it sound like Paul and Jessica weren’t captured like Leto was – “Paul and his mother, Lady Jessica, just barely escaped in an ornithopter, a bird-like flying machine, into the desert”. This obscures the Baron Harkonnen’s actual motives for allowing his nephew to squeeze the planet – “The Fremen had interfered with his destruction of the Atreides forces by helping the remnants to get away. He decided to get rid of the native scum once and for all”. And this overlooks Jessica’s role in putting the armed Fremen leader, Stilgar, in a chokehold and securing a promise for her and her son’s safety – “Having survived a sand storm and a sandworm, they were trapped by a band of Fremen who, following their law of survival, were about to kill them for their water. Because Paul had been specially trained since birth in weapons fighting, Mentat computing and the Bene Gesserit ways, he demonstrated an extraordinary ability to maintain control of the situation.” – although the next sentence does acknowledge that “He and his mother so impressed the band….”

The last sentence implies that later books cover the jihad, when actually there is a time gap and the reader doesn’t learn much more than its effects – “The second and third books continue the jihad as it spreads from Dune to across the galaxies.” But the most obvious error is the idea that Paul’s abilities extend to controlling the weather – “Calling upon his newly realized powers, Paul summoned a tremendous sand storm to cover his ambush.” This seems to be a misinterpretation of Paul’s prescient ability and statement “It’s my storm…Though it shook the entire world it could not be more than I wished.” The ability to see a big storm is coming and plan for battle accordingly does not mean he caused it. Or it’s possible there is confusion with events in the David Lynch 1984 film adaptation.

After receiving the Dune: Ixians & Tleilaxu (House Expansion) to the game, I tried out playing as the Bene Gesserit and my opponent played as the Tleilaxu. The Bene Gesserit can use the Voice in battles to prevent others from using certain types of cards, and I enjoyed getting to use that ability. Another of their features is that you can predict at the game’s beginning which faction will win and on which turn, and if this prediction comes true, you become the winner instead. Unfortunately I didn’t plan in advance enough to lure my opponent into winning during the turn I had predicted; I was too obvious in leaving a stronghold open at a certain point. We felt the Tleilaxu were a little supercharged in a two-player game because they benefit from troops being sent to the Tleilaxu tanks, but their Face Dancer switch-out ability was interesting and very much in line with the books. It was still a good game and made us want to play again to try new factions. 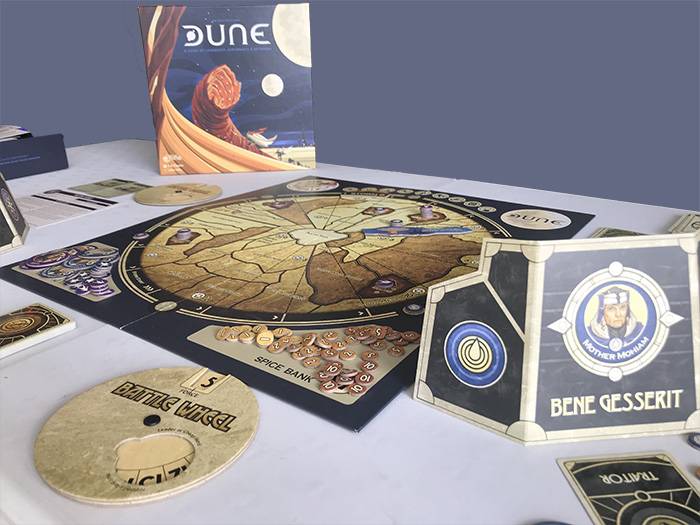 For more information, check out Board Game Geek’s overview page on Dune (2019) and the Dune: Ixians & Tleilaxu (2020) expansion.

Next is a review of the new Dune: Imperium board game featuring artwork from the upcoming film.