Dune: Imperium (2020) retains the essence of factions fighting for control of resources, but brings them out into the main gameplay more than its predecessor Dune (2019) board game. It feels more like you are playing politics rather than physically maneuvering around the planet Dune, as was the case in the previous game with its constantly moving storm and spice caches.

The left-hand side of the board features the four factions of the Emperor, Spacing Guild, Bene Gesserit, and Fremen. On the top are the Landsraad Council and CHOAM, and the planet Dune takes up the main board area. Each player takes one of the eight leaders from one of the four Great Houses available (Atreides, Harkonnen, Richese, and Thorvald [the latter two are from the expanded universe]). If you’re playing a solo or two-player game, there is a House Hagal which acts as an automated opponent (there’s also an app you can use to make it easier to do their turns). The Intrigue deck of cards helps provide randomization. The Imperium deck offers different and/or better cards than your starting deck. It also includes most of the artwork in the game, much of it based on the upcoming film. 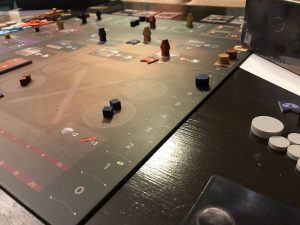 Using a combination of deck-building (like Dominion) and worker-placement (like Agricola) game elements, the game felt familiar yet new. I watched the recommended learn-to-play video sponsored by the game publisher, which helped explain the rules. It was nice to have someone walk through the major points rather than try to interpret all of the rule booklet. Having experience with the above-mentioned games with similar elements, it was easy to pick up. Some of the rules and modifications for a two-player game weren’t clear, but overall it was a good initial experience. It took about two hours after set-up and now that I have the hang of it, I want to play again and work on crafting a stronger deck and being more strategic about conflicts.

Each round begins with a new conflict card being flipped, so you know the rewards of winning the conflict and can determine how many troops you’d like to try to get into the battle. Then you draw a hand of five cards from your deck and choose to take either an ‘agent’ or ‘reveal’ turn. The cards have different color areas and effects for when you use them as part of one or the other type of turns. This allows them to have multiple uses and requires more thinking about whether to use or save them.

Taking an agent turn means deploying one of your two starting agent pieces to a space on the board and doing what the space allows. If you go to one of the four factions’ spaces on the left side of the board, you move up the faction track, and eventually you can gain victory points and/or other rewards by having more influence with each faction.

Once you run out of agents or choose not to play any more, you take a reveal turn. You reveal the cards left in your hand and use the effects. If you have enough influence points to buy cards to add to your deck, you can choose whether or not to buy one or more. This is how you improve your deck with stronger and more varied cards. Then you determine your combat strength if you have troops in the conflict zone. If you have Intrigue cards, these can be played at various points during your turn and throw a wrench in your opponents’ plans. Once the conflict is resolved, the winners take the rewards, troops go back to players’ supplies, and some things are checked and the next round starts. The back of the leader cards have a helpful player aide that outlines each step, so you’re not having to constantly check the rule booklet as you’re learning.

Does it capture the feel of Dune? I’d say yes. The Fremen are the pathway to water and troops. The Bene Gesserit are associated with intrigue and bettering your cards through ‘selective breeding’ (i.e. trashing one to draw two more). The Spacing Guild are able to facilitate going to any location through foldspace and can deposit a large number of troops for a high spice price. The Emperor is a source of money, troops, and intrigue. The Landsraad Council is about persuasion, troops, and usage of a Mentat. And CHOAM is concerned with spice and money. When I paid the Guild to bring down troops and had to build up influence with the Fremen to do certain actions, etc., it reminded me of events in the book and felt aligned with the characterization of the factions.

If you have the other Dune board games as I do, this one stands as a different gameplay experience and is worth checking out, especially if you like deck-building and worker-placement elements. You never have enough agents to deploy on spaces or time to do everything, and I’m looking forward to playing again to see how different strategies and leaders/Houses can be used to their full advantage. Note: On second gameplay, it became clear that there need to be more cards that allow trashing so you can build up a stronger deck.

For more information, check out Board Game Geek’s overview page on Dune: Imperium (2020).