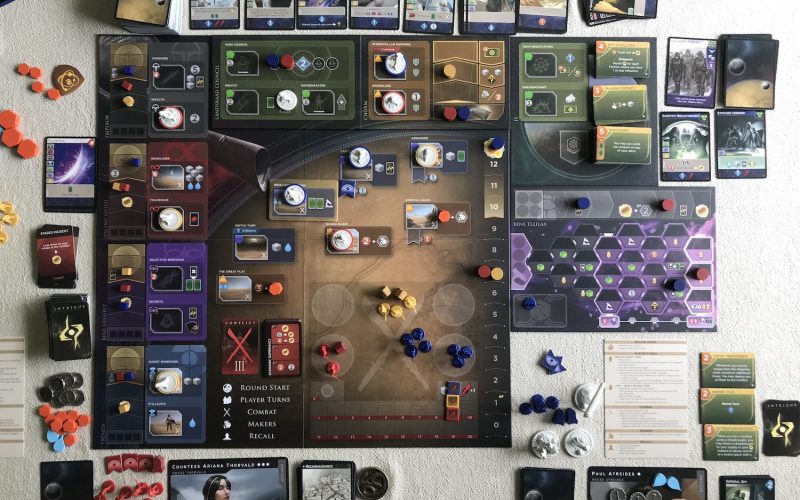 Dune: Imperium – Immortality is the game’s second expansion and ramps up the strategy with the addition of the Bene Tleilax / Tleilaxu, who focus on genetic engineering and research. This is my summary and review of the new elements based on two 2-player games (around 2 hours each) with both the Immortality and Rise of Ix expansions. I use the Dire Wolf Game Room app for the third automated player, House Hagal, that you need for a 2-player game.

The Bene Tleilax board has 2 tracks: a research track and Tleilaxu track.

The research track represents your progress in research, and movement is triggered by the new microscope icon. There are bonuses in the spaces as you advance, but you can only move right, so you have to lock in which direction you want your research to take. There are two genetic markers along the track that unlock additional effects on cards with the genetic marker icon. The little neon cube icon represents a ‘specimen’ – essentially a ghola that you send from your troop supply to the axlotl tank area. You can then use these specimens to pay for cards in the Tleilaxu deck.

The Tleilaxu track is a more straightforward track with rewards of intrigue cards and victory points. Movement is triggered by the yellow scarab-type beetle icon. 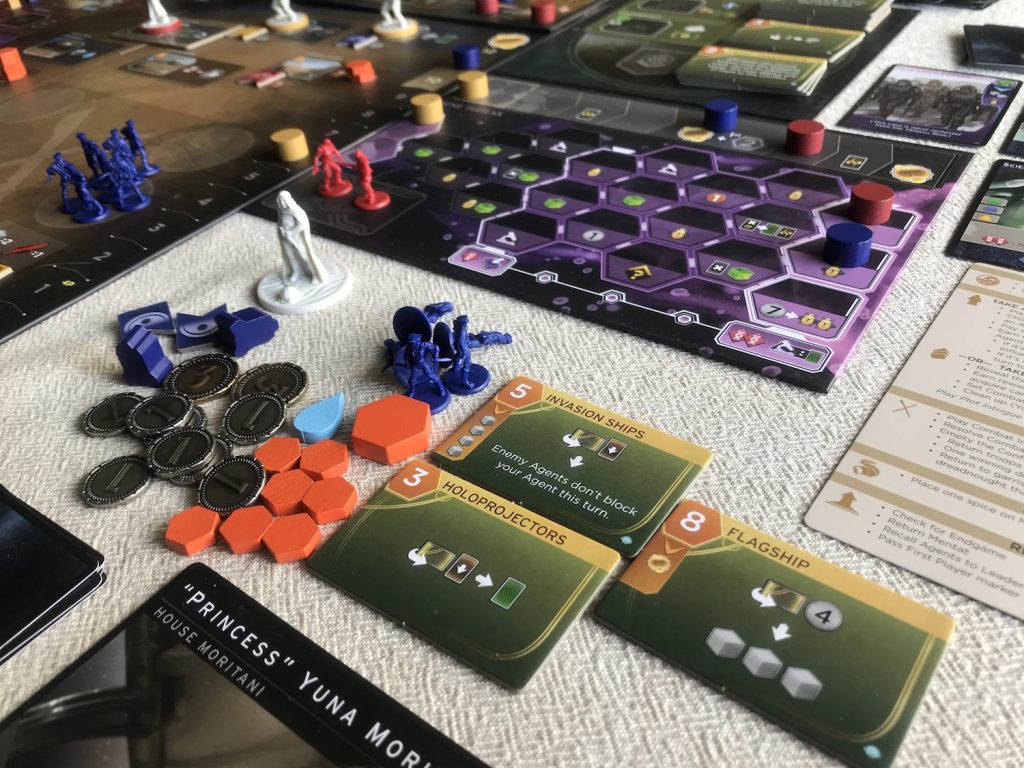 There are significant advantages to advancing along the Bene Tleilax board’s research track, though I was slow to do so in the first game. I only got enough specimens in the axlotl tanks to afford to buy one card from the Tleilaxu card area. The second time around, I put more effort into playing cards and going to the space with the microscope icon to move along the track and gain specimens. My opponent made more progress on the Tleilaxu track, but it didn’t make a huge difference in terms of the victory points. We liked the new board and opportunities to make decisions about when to spend energy advancing on the tracks and which pathway to take on the research one.

We both found good Tleilaxu cards to buy in each game, although I wish there was some churn mechanism. With only two cards that can be bought, sometimes neither were what I wanted and I ended up going for the Reclaimed Forces option, but this doesn’t have a deploy ability.

Some cards have the word Graft on them, which means the card has to be played with another card. While this depletes the cards in your hand more quickly, it can be a great advantage since it allows you to use the effects on both cards and choose which icon to use to deploy your agent.

The Graft feature was my favorite since it really expanded what could be done on one turn with the card abilities. I used grafting more during the second game and even got a card that could be grafted to any card in the Imperium line-up, so I could latch onto a powerful card without having to pay for it or use up one in my hand. I like the versatility of this feature and how some other non-Graft cards have additional abilities unlocked if used for grafting.

The family atomics token lets you remove all the cards that are face up next to the Imperium deck and deal new ones. Each player can only used theirs once per game to ‘explode’ the line-up if they’re not happy with the current cards out.

During the first game, my opponent used their family atomics token to reload the face-up cards. I used mine during the second game to try to get a better card to graft onto with my Tlexilaxu card, but it backfired because the new cards weren’t as good as the existing ones. It’s still a nice option to have to refresh the deck. Maybe I could add a house rule that this could also refresh the Tleilaxu cards on the board.

The Research Station overlay adds the microscope icon to this space on the board (and takes away one of the draw card icons).

This is still a costly space with its price of two water, but it can be an asset to get more cards in hand (especially once you have your third agent) for grafting or using other new cards, while also advancing on the Bene Tleilax board.

The expansion adds 15 new intrigue cards, and new ‘Experimentation’ starting cards with the microscope symbol that are substituted for the ‘Dune, the Desert Planet’ cards.

Intrigue cards are always handy when you can get a hold of them. On the second game I made more effort to play the Experimentation cards to advance on the Tleilaxu track.

Immortality definitely increased the strategy and number of things to keep track of, so turns took a little longer sometimes but we both enjoyed the new Bene Tleilaxu elements. The artwork captures the strange and weird vibe of the Tleilaxu and their mysterious experimentation, making the elements thematically joined together and interesting to look at.

The expansion also played well with the Rise of Ix expansion – in that they didn’t seem to compete with each other. I ended up using the Rise of Ix shipping track more than in the past to get shipping rewards, and buying more tech tiles to get an advantage. My opponent really harnessed the power of the tech tiles and dreadnaughts in the second game, which led to their victory. I really like the shipping track and find it’s a good way to get Solari to secure that all-important third agent piece as soon as possible.

We both enjoyed playing with the Immortality expansion and since it plays well with Rise of Ix, I expect we will always play with both of them in the future.