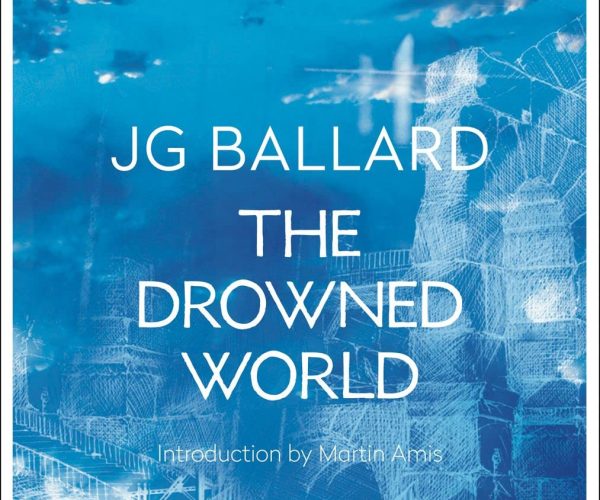 J.G. Ballard’s The Drowned World (1962) is often mentioned in scholarship for its positioning on the cusp of the 1960s/1970s New Wave in science fiction. I found it to be an interesting novel that reflected the author’s desire for science fiction to explore inner, psychological space and aim at being more literary. I was surprised by how much this book felt like a traditional novel, yet still managed to weave in science fiction genre elements. It has stood the test of time and might even feel more relevant today due to its climate change-influenced setting.

What struck me throughout was Ballard’s use of descriptive language to paint a picture of a post-apocalyptic Earth covered in water, and he definitely enjoyed a good simile (comparison using ‘like’ or ‘as’). Here are some descriptions I particularly liked:

Without his peaked cap, his thin sandy hair blown forwards over his face, Riggs looked like a ferocious sparrow, his little jaw jutting fiercely at the open air. (54)

his tall stooped figured silhouetted like a gaunt crow across the water. (58)

The yellow air of the noon high seemed to press down like a giant translucent counterpane on the leafy spread, a thousand motes of light spitting like diamonds whenever a bough moved and deflected the sun’s rays. (62-63)

Admittedly, he also used some fancy vocabulary in his imagery that I was unfamiliar with. Considering the caliber of other genre fiction around this time, I think this shows the effort he made toward challenging his readers with a higher reading level. Some examples:

The Drowned World was published the same year as ecologist Rachel Carson’s Silent Spring, and was possibly an influence for Dune. At the very least, it shows similar ideas emerging around the mid-twentieth century. In comparing The Drowned World and Dune, I found the references to ecology and psychology quite similar.

In The Drowned World, the planet has been heating up after the ice caps melted, and cities have been turned into swampy, deserted messes. The main character, Dr. Kerans, has been at a “testing station” (12) that moves to different lagoons across Europe, mapping the changing landscape and evacuating people. The book explains that “He had been born and brought up entirely within what had once been known as the Arctic Circle—now a sub-tropical zone with an annual mean temperature of eighty-five degrees—and had come southward only on joining one of the ecological surveys in his early 30’s” (20-21).

There is also an explicit mention of ecologists: “Had the report been taken at its face value—heralding the momentous return of the age of the great reptiles—an army of ecologists would have descended on them immediately” (9). When Dr. Kerans is escaping from the city, he finds himself navigating away from the sea and into sand dunes filled with remnants of the creatures that used to exist:

Around him the great banks undulated for miles, the curving dunes dotted with cuttle-fish and nautiloids….one dune giving way to another… Carefully avoiding the quicksands between the dunes, he moved on towards the jungle… (168)

Dune has the ecologist Dr. Liet-Kynes who has been supervising botanical testing stations and leading the Fremen to secretly transform the desert into a water-filled paradise. Arrakis /Dune is covered in sand dunes, with dangerous drumsand patches.

Ballard’s interest in psychology, especially the unconscious, dreams, and Freudian and Jungian theories also appear similar to Herbert’s, although Ballard is sometimes more overt in mentioning the terminology.

“…you can have a shot at reading Hardman’s psychology” (55)

His unconscious was rapidly becoming a well-stocked pantheon of tutelary phobias and obsessions, homing on to his already over-burdened psyche like lost telepaths. Sooner or later the archetypes themselves would become restive and start fighting each other, anima against persona, ego against id…. (71-72)

The descriptions of layers of the unconscious and the dissolving of barriers between dreaming and waking very much reminded me of Herbert’s descriptions of Paul as the character becomes more influenced by the spice.

“The innate releasing mechanisms laid down in your cytoplasm millions of years ago have been awakened, the expanding sun and the rising temperature are driving you back down the spinal levels into the drowned seas submerged beneath the lowest layers of your unconscious, into the entirely new zone of the neuronic psyche. This is the lumbar transfer, total biopsychic recall. We really remember these swamps and lagoons.” (74)

The light drummed against his brain, bathing the submerged levels below his consciousness, carrying him downwards into warm pellucid depths where the nominal realities of time and space ceased to exist. Guided by his dreams, he was moving backwards through the emergent past, through a succession of ever stranger landscapes… (83)

More and more the dreams had begun to encroach on his waking life, his conscious mind becoming increasingly drained and withdrawn. The single plane of time on which Strangman and his men existed seemed so transparent as to have a negligible claim to reality. (96)

This blunting lethargy deepened, unbroken by the violence around him, and more and more he felt like a man marooned in a time sea, hemmed in by the shifting planes of dissonant realities millions of years apart. (129)

Both books also have at least one example of memento mori (reminder of death) using skulls for key characters. In The Drowned World, the villain “Strangman’s chalk-white face was like a skull, and he had something of the skeletons’ jauntiness” (94). In Dune, “[His father’s] smile shocked Paul: it had a skull look on the Duke’s narrow features” (47).

The main difference I couldn’t help notice was the depiction of the one woman in The Drowned World. She does not play a significant role – she is more of a stubborn person stuck in the past who carries on doing her makeup as the world collapses around her, and then becomes a kind of damsel in distress. She is certainly not similar to the Bene Gesserit in Dune.

Beatrice Dahl lay back on one of the deck-chairs, her long oiled body gleaming in the shadows lie a sleeping python. The pink-tipped fingers of one hand rested lightly on an ice-filled glass on a table beside her, while the other hand turned slowly through the pages of a magazine. (25)

…Beatrice continued to tend her own appearance devotedly. On the few occasions when Kerans called she would be sitting on the patio or before a mirror in her bedroom, automatically applying endless layers of patina… (88)

The Drowned World had elements of Heart of Darkness and post-apocalyptic stories such as The Day After Tomorrow film, as well as the Rescue Rangers in terms of the swamps and menacing alligators. It kept a good pace and held my interest, and has a still-relevant message in its warning about what the world could turn into and how humans might respond to catastrophic climate crises.