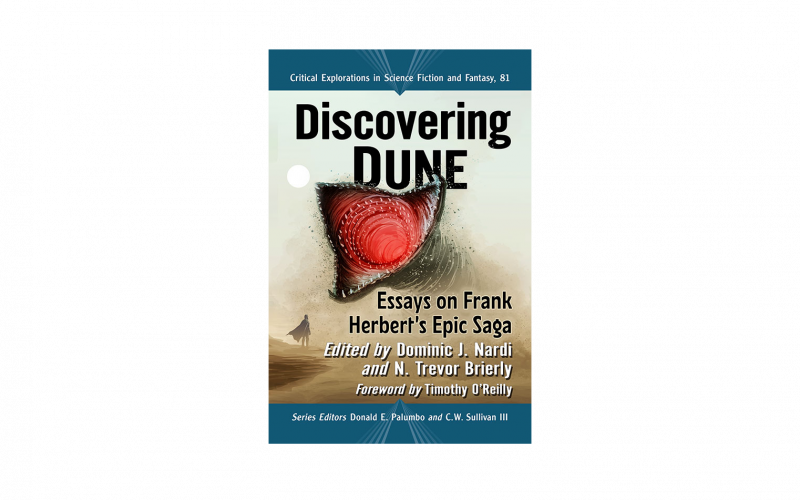 Whether you’re an old or new Dune fan, the recently published essay collection Discovering Dune: Essays on Frank Herbert’s Epic Saga will have something to interest you.

Edited by Dominic J. Nardi and N. Trevor Brierly, with a foreword by Timothy O’Reilly, this book by publisher McFarland holds itself to academic standards while being largely written in an accessible style that will appeal to a wider audience. The book showcases several interesting topics across 14 main chapters, divided into 4 sections:

In the Politics and Power section, Edward John Royston looks at how Herbert draws attention to the power of narratives (stories). You’ll be paying more attention to how many stories within stories are in the Dune series, and the kinds of narrative terms Herbert uses such as “superb setting” and “something symbolic”. Next, Dominic J. Nardi discusses how game theory models can help make sense of the tension between prescience and free will in the series. I appreciated his use of figures to visualize the different choices characters have and make the concepts understandable. This is a unique way to analyze science fiction that will probably become more popular with the rise in gaming culture. Then Michael Phillips and Caroline Anne Womack do a close study of God Emperor Leto II through the lens of different biological and philosophical theories. Leto II is certainly an understudied character, and for those who like diving into theoretical approaches in literary studies, these chapters provide new avenues for considering this complex character.

In the section on History and Religion, Maximilian Lau compares Princess Irulan with the 12th-century Byzantine Princess Anna Komnene and finds remarkable similarities in these successful literary women, one fictional and one real. Lau provides much-needed expansion of the scholarship on Irulan and will delight those who enjoy learning more about key figures in the medieval age. R. Ali then takes on the challenge of exploring the importance of Islamic themes and terms in the Dune series. His argument that Dune is probably the first science fiction story to showcase Arab Futurism offers a more positive reading of the Middle Eastern influences than some critics, and opens the door to further study of the series from this viewpoint. N. Trevor Brierly closes off the section by looking at why the Orange Catholic Bible is mentioned as being an important part of Paul’s transformation. You’ll see how the limited times the O.C. Bible appears in Dune actually add up to something significant.

The Biology and Ecology section starts with Leigha McReynolds’ claim that Paul Atreides is actually a genetic deviant when understood through the emerging field of disability studies. She covers issues of reproduction in relation to Paul and the Bene Gesserit and shows the potential to see Paul in a new way through this genetic perspective. Next, Paul Reef provides more detail about what was happening in the American environmental movement after World War II. His chapter shows us again how forward-thinking Herbert was in terms of his ecological perspective. Willow Wilson DiPasquale explores Herbert’s development of similar themes across Dune and its sequels in order to show the full extent of Herbert’s vision, which many readers miss by stopping after the first book or two. You might find the analysis of horticultural imagery in the sixth book prompting you to go back and review it again; perhaps this helps explain the strange couple and the cliffhanger!

The final section Philosophy, Choice, and Ethics is for those who enjoy diving into philosophical thinking about concepts such as time and decision-making. There is some overlap with themes in the first section as well. Nathaniel Goldberg studies time in Dune, particularly Paul’s knowledge of the future. Jeffery L. Nicholas (editor of the collection Dune and Philosophy: Weirding Way of the Mentat) looks at Paul and power and the differences between his various education sources. Curtis A. Weyant examines the perspectives of humanity by different groups such as the Bene Gesserit and Fremen. Finally, Kevin Williams (author of Wisdom of the Sand: Philosophy and Frank Herbert’s Dune) looks at the Bene Gesserit and their education/indoctrination of others throughout the Dune series. These chapters tend to contain more jargon than ones in the other sections, but will satisfy the continuing interest in applying philosophical theories to this rich and complex series.

The editors are clear in the introduction that they want this book to help fix one of the ongoing issues with scholarship on Dune – there just isn’t that much of it! What does exist is often scattered across various journals from different subject areas, with the main audience being other academics. Also, most scholarship focuses on the original novel, meaning the five Dune sequels have hardly been touched. From my perspective, this book succeeds by bringing together a range of perspectives and a lot of original research that can be built upon by people in the future. It also includes a reference list on other studies of the Dune series to make this task even smoother.

Perhaps more importantly, though, this book is written in a way that new fans of the series—intrigued by the new film adaptations and pop culture attention—can pick it up and discover something interesting about Herbert’s work. Hopefully they will also be inspired to dive into the sequels as well! 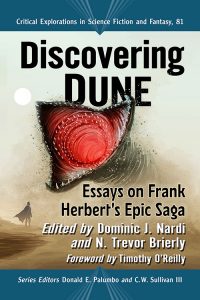 *Disclosure statement: I received a copy of this book for the purposes of writing a review and previously wrote a short blurb which appears on websites where the book is sold. I have participated in conference panels and talks with fellow writers Dominic Nardi and Leigha McReynolds.